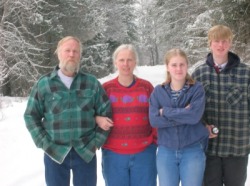 Whatta buncha raggamuffins, eh? This picture was taken in 2006, I think. If that son gets any taller, we'll be askin' him about the weather up there where he is!

Do you have comments? Questions?

If you'd like to send us your comments or questions,
use the box at the bottom of the page.
Thanks!

More family members and some employees.....

Someone recently told us that he's big enough to eat hay! We say, he does! Recycled, used hay! From the neighbor's horses! LOL

And then we got the Malamutes! 1st there was one, then one more, then 2 more! 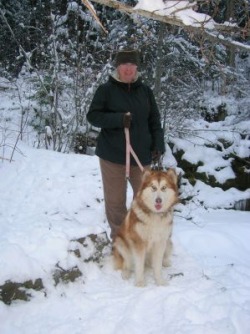 Son decided he wanted to get away from the collies that we had had previously after losing his lifelong companion collie at age 20, back in 2007. Very old for a dog that size! We had collies around since the early 1980s.  But after having had a sled dog while living in a remote mountain cabin for several years, then a friend had invited him dog sledding several times after he got older, and his attempts at convincing the German Shepherd to pull a sled faster than he was willing, son began to look at sled dogs. He read books about them and researched them on the internet and decided the Alaska Malamute would best fit what he wanted out of a companion and sled dog.

So he got his first malamute in the Spring of 2008 and hasn't looked back! He's been working with them and training them since for a small sled team. He has put up a website all about his mals. 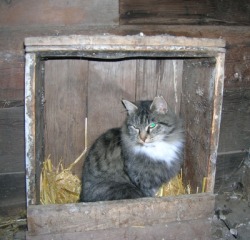 She really doesn't lay eggs nor does she cluck. But she DOES spend a lot of time in the nest box. Even letting the hens in with her to lay their eggs! 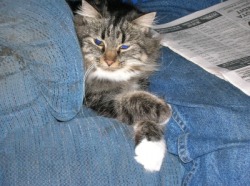 This kitty is our upstairs employee. While she isn't much for catching mice, her presence surely doesn't hurt.


She is a kitty that must stay indoors since she has some mental problems. If there is such thing as schizophrenia in cats, surely this cat has it. She was a rescue and we keep her as protected as we can. 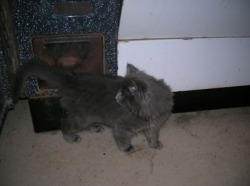 Memorials of our pets that have passed on

Comments or questions? Form has been moved here

If you'd like a response, please make sure you include your email address/contact information. Thanks!

It appears that the contact form that was here wasn't working properly. If you've sent a message using it, I probably didn't receive it. Please go to the new contact page HERE to send it again. Thank you and my apologies for the trouble.